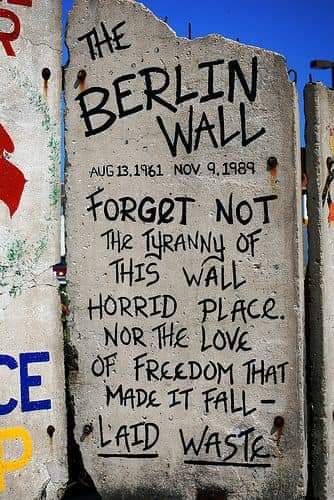 On this day November 9 we at MVPR will celebrate the fall of the Berlin Wall!

Two years ago our MVPR volunteer Usama Iqbal took me on a one-kilometer tour of what’s left of that infamous baracade that separated families and friends for nearly three decades.

I first walked along the wall as a 19-year-old in 1967. The wall had been erected five years earlier on August 13, 1961, by the communist regime of East Germany.

.The Wall cut off West Berlin from surrounding East Germany, including East Berlin. The barrier included guard towers placed along large concrete walls, accompanied by a wide area (later known as the “death strip”) that contained anti-vehicle trenches, “fakir beds” and other defenses.

The Eastern Bloc portrayed the Wall as protecting its population from fascist elements conspiring to prevent the “will of the people” in building a Marxist state in East Germany.

The wall was hated by Germans on both sides.

Tearing it down was a historic event that re-opened the border crossings between East and West Germany. It led to the reunification of that nation. God bless Germany!

Afghan war was built on a mountain of lies