Samuel Shropshire speaks at rally to welcome Syrian refugees to Bratislava, Slovakia. The rally was organized by Slovak Catholics and Muslim Voice for Peace & Reconciliation (MVPR). Working together we can accomplish great things for God and humanity.

More than 1.3 million refugees had crossed into Europe by March, 2016. They came by land and sea. This influx of refugees sparked a crisis as countries struggled to cope with the millions of arrivals. It created division in the European Union over how to best deal with resettling people. While Sweden, Germany and Austria offered an immediate welcome, some nations gave way to right-wing extremists and racists, refusing to help.

While the vast majority of refugees arrived by sea, many chose to walk to freedom and safety, principally via Turkey to Greece and then Albania and northward! Most hoped to reach Western Europe to join relatives already resettled there.

Adding to the horror of the crisis was the number of deaths occurring at sea. Now, nearly two years into this crisis, refugee ships continue making the crossing, some sinking in the Aegean and Mediterranean seas.

And just this past week came a battered, blue-decked vessel that flipped over on Wednesday as terrified migrants plunged into the waters of the Mediterranean. The next day, a flimsy craft capsized with hundreds of people on board. And on Friday, still another boat sank into the deceptively placid waters.

Now another week and three sunken ships are again confronting Europe with the horrors of its refugee crisis, as desperate people trying to reach the Continent keep dying at sea. At least 700 people from the three boats are believed to have drowned, the United Nations refugee agency announced on Sunday, in one of the deadliest weeks in the Mediterranean in recent memory.

Most, attempting to escape war, terrorism, poverty and starvation in their homelands, are desperate to reach Europe, Canada and America, where they believe a new and better life awaits them.

But what they face in the West, in some cases, is extreme opposition based on misguided fear, anger and racism.

Since April 2015, the European Union has struggled to cope with the crisis, increasing funding for border patrol operations in the Mediterranean, devising plans to fight migrant smuggling, launching Operation Sophia and proposing a new quota system to relocate and resettle asylum seekers among EU states.

Individual countries have at times reintroduced border controls within the Schengen Area, and rifts have emerged between countries willing to accept asylum seekers and others trying to block their arrival.

The conflict in Syria continues to be by far the biggest driver of refugees. But the ongoing violence in Afghanistan and Iraq, abuses in Eritrea, as well as abject poverty in Kosovo, are also leading people to look for new lives elsewhere.

According to the UN, there are more 60 million refugees in today’s world. And some nation’s are not at all friendly to these men, women and children who are seeking safety and a better life.

After Slovakia, the Czech Republic and Hungary, came out last year against taking in refugees, the great majority of which are Muslim, Cyprus and other nations have also sought to block refugees from entering their nations.

Dominik Smrek and Shropshire address crowd of several hundred Slovaks in Bratislava. They came to encourage support for the refugees coming from Syria, Iraq and Afghanistan.

Some have sought to reject refugees simply based on their religious beliefs.

“We would seek for them to be Orthodox Christians,” Cyprus’ Interior Minister Socratis Hasikos told state radio. “It’s not an issue of being inhuman or not helping if we are called upon, but to be honest, yes, that’s what we would prefer.”

Slovakia’s Prime Minister Robert Fico also complained about the flow of refugees, setting an arbitrary number of “200 Christians” to be received.

Fico has taken a hard stand from the beginning, echoing far-right Polish leader Jaroslaw Kaczyński, Viktor Orbán and Czech President Miloš Zeman in an openly Islamophobic campaign against both the refugees and the EU’s attempt to redistribute the refugees.

Although the leader of a (nominally) center-left party, Direction-Social Democracy (SMER-SD), Fico has a history of nationalist statements, mostly against Roma (so-called “Gypsies”), which have landed him in trouble with his European allies in the Progressive Alliance of Socialists and Democrats (S&D).

Despite threats from S&D to censure him and his party, Fico doubled down by making various Islamophobic statements and threatening to take the EU to court over its refugee plan. He even went so far as to say that he wanted to put every Muslim in Slovakia under surveillance!

Slovak Prime Minister Robert Fico, who railed against the refugees. His appeal to extremist groups in Slovakia failed to secure a majority coalition for him in the Slovak parliament.

These days we expect elections in East Central Europe to be bad news for liberal democracy. In 2014 Hungary re-elected its strongman Viktor Orbán, despite the fact that he had transformed his country into an narrow-minded democracy, and in 2015 Poland brought back Law and Justice (PiS), the party of Jaroslaw Kaczyński, who has been praising Viktor Orbán’s “Budapest Model” since 2011.

Surprisingly, Fico’s courting of right-wing groups did not help him in the Slovak general elections. Based on the results Smer-SD was the big loser of the election, winning just 28.3 percent of the vote, a loss of 16.1 percent compared to 2012!

Clearly this is not because of a lack of support for Fico’s anti-immigration positions within the Slovak population. Even before the refugee crisis hit Europe, Slovaks were among the least positive towards foreign immigration within the EU, and, given the various mass demonstrations during 2015, that situation has not changed for the better.

But the demonstrations did not just bring people together to voice opposition to Muslim refugees, they also gave a platform to a variety of far-right activists and groups. The most visible was Marian Kotleba, former leader of Slovak Brotherhood, a neo-Nazi party that was disbanded by the Supreme Court.

Kotleba has since bounced back, founding the extreme right People’s Party of Slovakia (ĽSNS), and getting elected governor of the Banská Bystrica Region in 2013. Kotleba and ĽSNS were very active and visible in the anti-immigration demonstrations in Slovakia and were rewarded with 8.0 percent of the vote (an increase of 6.4 percent) in the 2016 national elections. Even more shocking, ĽSNS was the biggest party among first-time voters, attracting a staggering 22.7 percent among 18 to 21 year olds!

What then should be our response?

In such crises, it is understandable that citizens are concerned about a mass influx of foreigners—especially when it involves hundreds of thousands of men and women of different faiths and cultures. After all, settling refugees in our communities exhausts our own governments’ resources, making it difficult to meet the needs of our own citizens.

But we people of faith have a higher calling to resist extremist politics when it is in opposition to immediate human need for compassion. We Christians and Muslims must respond as we believe Jesus and Mohammad (PBUT) would respond, encouraging their followers to assist helpless pilgrims and sojourners. There is a very famous Arabic statement in this regard, “The foreigner is blind even if he has eyes,” which indicates the vulnerability of the stranger and suggests that the stranger needs help and guidance.

What is it like when hundreds of thousands of men, women and children flee war? Watch the video below, and learn from the masses of Syrian refugees who are now making their way to Europe under the most difficult of circumstances. Watch and pray! And please give so Muslim Voice for Peace & Reconciliation can make a difference for Muslims around the world by encouraging an end to religious discrimination:  www.mvpr.org 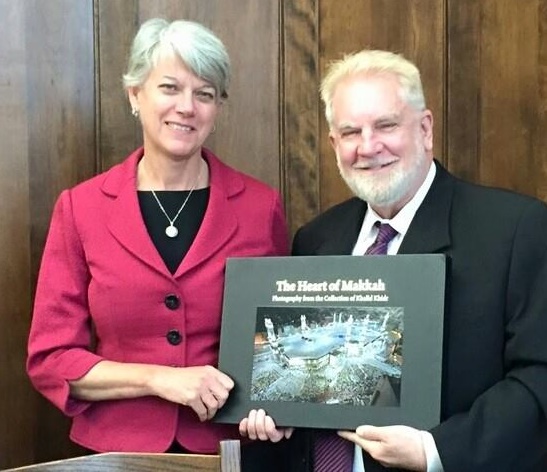 A Muslim voice for peace