Rights groups call for urgent investigation after Mohibullah shot dead outside his office.

A prominent Rohingya Muslim leader has been shot dead in a refugee camp in southern Bangladesh.

Mohibullah, who was in his late 40s, led one of the largest of several community groups to emerge since more than 730,000 mostly Muslim Rohingya fled Myanmar amid a brutal military crackdown in August 2017.

He was talking to other refugee leaders outside his office after attending evening prayers when an unidentified gunman shot him at least three times, Mohammad Nowkhim, a spokesman of Ullah’s Arakan Rohingya Society for Peace and Human Rights (ARPSH), said. 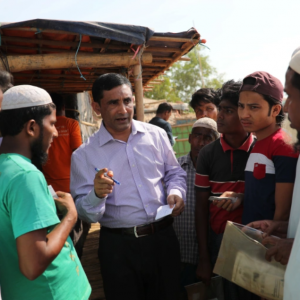 “He was shot dead at point-blank,” he told AFP news agency from a hideout, as the killing sent many Rohingya leaders into hiding.

Mohibullah was rushed to the main Medecins Sans Frontieres (MSF or Doctors Without Borders) hospital in the camp.

“He was brought in dead,” a medical source confirmed to AFP.

Rafiqul Islam, a deputy police superintendent in the nearby town of Cox’s Bazar, told the Reuters news agency that Mohibullah had been shot dead but had no additional details.

A spokesperson for the UN High Commissioner for Refugees said the agency was “deeply saddened” by the killing.

Amnesty International urged a thorough investigation into Mohibullah’s death and for the Bangladeshi authorities and UN refugee agency to work together to ensure the protection of people living in the camps, which the group said were facing an “increasing problem” of violence often linked to the control of illicit drugs.

“The onus is now on the Bangladeshi authorities to expedite an investiugation into his murder and bring all those suspected of criminal responsibility to justice.

Invited to the White House and to speak to the United Nations Human Rights Council, Mohibullah was one of the most high-profile advocates for the Rohingya whose treatment is now the subject of a genocide investigation in The Hague.

Mohibullah formed the ARPSH in a Bangladeshi camp months after the influx of refugees from Myanmar, and it helped investigate the attacks carried out by the Myanmar armies and the Buddhist militias during the crackdown. 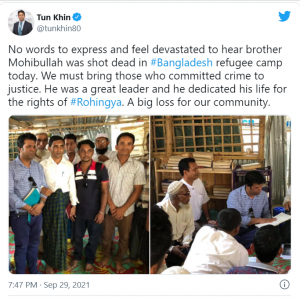 In August 2019, he organised a massive rally at Kutapalong camp, the main Rohingya settlement, which some 200,000 Rohingya attended. The rally confirmed his position as a leader among the refugees.

But in recent years, Bangladeshi security forces restricted the activities of Mohibullah’s group and ARPSH was not allowed to hold any rallies during the anniversary of the crackdown in 2020 and 2021.

“Mohibullah was a vital voice for the Rohingya who had already suffered unimaginable loss and pain when they arrived as refugees in Bangladesh,” Meenakshi Ganguly, South Asia director at HRW said in an emailed statement. “He always defended the rights of the Rohingya to safe and dignified returns and to have a say in the decisions concerning their lives and future. His killing is a stark demonstration of the risks faced by those in the camps who speak up for freedom and against violence.”