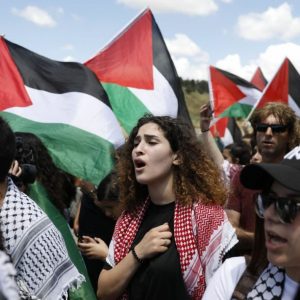 There are today more than 6 million Palestinian men, women and children currently living in forced exile. They are what is known as the Palestinian diaspora. There are 3.2 million living in refugee camps in Jordan alone.

These Palestinians are in most cases considered stateless—having no passport, many having lived in refugee camps all their lives. For the most part, they are descendants, who fled or were expelled from their country over the course of the 1947 – 1949 Palestine War when Zionists invaded Palestine to found the state of Israel. This exodus is known to Palestinians as the Nakba, meaning “disaster.” Palestinian populations that resisted were terrorized, killed and/or dispossessed of their homes, businesses and farmlands.

Many other Palestinians fled the violence of the Six Day War of 1967. Most of these refugees live in or near the 68 Palestinian refugee camps across Jordan, Lebanon, Syria, the West Bank and the Gaza Strip.

These men, women and children are known as the world’s oldest unsettled refugee population, having been under the governance of Arab states following the 1948 Arab-Israeli War.

Like the Jews, who prior to settling in the current State of Israel, these Palestinian peoples whose families had lived in Palestine for 2 thousand years, also dream of returning to their homeland in Palestine.

There is historic precedence

In 1948, at the end of World War II, Stalinist forces were given occupation rights to Eastern and Central Europe. This “Iron Curtain” was liifted in 1989 when the peoples in these nations broke free from Soviet communist control.

Citizens of these nations living in exile in the West were once again permitted to return. The homes, lands and In some cases their businesses, were returned to them. When it was not possible to return their physical lands and properties these families and or their descendants could demand compensation.

The United States strongly supported efforts to restitute to rightful owners their properties confiscated by the Nazis during 1933 to 1945 and by the subsequent communist governments of Central and Eastern Europe.

Positive action on property issues was one of the criteria used to judge the profess of countries that aspired to membership in the North Atlantic Treaty Organization (NATO). The European Union also recognized the relevance of property issue in applicant countries. “We recognize that in REM property restitution may not be possible in all cases. Payment of compensation is the obvious alternative.”

Dealing justly with the Palestinian people

As a few Middle East Arab states consider awarding official recognition and peace to Israel, there can be no just peace without considering the injustices suffered by the Palestinian diaspora.

Peace with Israel must be just and cannot be concluded without consideration for the Palestinians and their descendants today.

Muslim Voice for Peace & Reconciliation insists: (1) Palestinians must be able to return to their homeland.(2) They must be able to reclaim their properties or be reasonably compensated for the same, should in some cases restitution not be possible. (3) Israel must relinquish control of the more than 200 illegal Jewish settlements and outposts on the West Bank in the Golan Heights and Gaza. (4) East Jerusalem must be recognized as the capital of the independent Palestinian state..

The renowned Jewish physicist Albert Einstein shared these concerns. He said, “It would be my greatest sadness to see Zionists do to the Palestinian Arabs much of what the Nazis did to the Jews.” Israelis must be the first to step forward, not just to establish diplomatic and business ties with wealthy Arab states, but to treat justly Palestinian men, women and children.

Let’s work for justice for the Palestinians.

So in the process of establishing a just peace in the Middle East, rectifying the dreadful wrongs of the past and in building a just future for all concerned, we dare not forget our millions of Palestinian brothers and sisters who have suffered terribly, having, in many cases, lived in refugee camps since 1948, being forced to live destitute lives, dispossessed of their properties and well-being.