Today I have joined Jamelaa Al Obaidy (Member of the Iraqi Parliament), her husband Abu Zaid and Dr Yousef Ali on a visit to the city of Mosul, Iraq. Mosul is believed by many to be the ancient city of Ninevah.

On our way from the Kurdish capital Irbil, we drove past one of four UN refugee camps established inside Kurdistan. Here there are more than one hundred thousand people living in tents and walking around in mud as a cold rain is falling.

In November 2014, the city of Mosul fell into the hands of Daesh (ISIS) terrorist forces. In the years following, Daesh progressively took control over an important territory in Syria and Iraq, representing one third of the Iraqi territory.

As a consequence, 3 million people were displaced from their homes and fled to Kurdistan, a region that remained protected from Daesh invasion. These Internally Displaced Persons (IDPs) are hosted in tent camps and in urban areas. Amongst them are Shia and Sunni Arabs, Kurds, Christians, and Yezidis of Sinjar–all befriending one another as they seek to survive the horrors of war.

As we cross through numerous military checkpoints to enter into Iraqi territory we begin to see buildings riddled with bullet packmarks and shattered windows.

Destroyed cars and piles of scrapmetal appear more and more regularly. We see unkempt children as young as 5-years old approaching lines of cars to beg or sell chewing gums and packs of tissues. I am told most of these boys and girls lost their parents. They are simply struggling on the streets to survive.

Jameela tells me many of these children are filled with unending hate towards Iraqi forces. Their parents were killed by Iraqis as their forces liberated Mosul from Daesh control. She mentions 10 year-old Ahmed who told her, “I swear to God I will kill the men who murdered my parents.”

The psychological trauma caused by Daesh and the liberating forces will last a life-time for most of these children.

Then we enter Mosul city to witness the horrid waste war has left behind.

On 9 July 2017, the Iraqi prime minister arrived in Mosul to announce the nation’s victory over Daesh, and an official declaration of victory was proclaimed on 10 July. However, heavy clashes continued in a final pocket of Daesh resistance in the Old City, for almost another 2 weeks.

It was estimated that removing the explosives from Mosul and repairing the city over the next 5 years would require $50 billion (2017 USD), while Mosul’s Old City alone would cost about $1 billion USD to repair.

As we wind back and forth through the devastation of bombed out neighborhoods, hotels, apartment buildings and businesses that same shocking smell of burning plastic, concrete, steel and charred bodies was all around me–the same smell that shocked my senses as I approached the ruins of the World Traded Centers several months after those devastating attacks.

In the middle of this holocaust I see teenage boys pouring from Abu Bakr al-Sadeiq School. I asked our driver Abu Zaid to stop the car so I could speak with school officials and students.

But given the hatred that lingers in the hearts of thousands of dispossessed, unschooled street children, one wonders if the killing will ever end.

The school’s few teachers tell me they need desks, computers, text books and much more. I don’t promise miracles. I say in typical Muslim lingo, “InshaAllah!”

I want to do something. I don’t know where to begin in the midst of this “liberated hell.” The battle for Mosul lasted almost nine months, left huge parts of the city devastated and in ruins, killed thousands of civilians and displaced more than 900,000 others.

All I can mutter after witnessing Mosul firsthand is, God bless MP Jamelaa Al Obaidy! She is truly an activist who wants justice for all the poor and dispossessed of Mosul. And thank you, Dr Yousef Ali for arranging this trip. I am grateful.

MVPR will begin a campaign to provide help to Mosul school children: desks, textbooks and computers. Please click “Donate” and give. 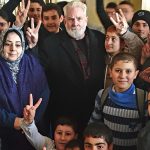 "You are the future of Pakistan!"

Our Rohingya brothers and sisters need our help and prayers!