Visitors read information board about Muslims in Britain during an open day at Finsbury Mosque in London. Photography: Ben Stansall/AFP/Getty Images

Recently I had the opportunity to visit the United Kingdom. Most of my time was spent in my ancestral homeland Shropshire County on the border of Wales.

I went there to get a close look at the spiritual history of the land; and what I discovered was profoundly surprising. I found that the God of Abraham the English once sought in Christian churches and Jewish synagogues is now more likely to be worshiped in Muslim mosques! Indeed, many churches have closed, and many of the buildings have been converted to bars, dance clubs, skate boarding rinks and grocery stores. There are now six mosques in Shropshire–five of them opened in former church buildings.

It does appear that over the past 50 years the British people have lost faith in organized religion much faster and more completely than many other western states. The most recent survey to show this comes from Win/Gallup, which found that Britain now appears to be one of the most irreligious countries on earth, with only 30% of Brits calling themselves “religious.”

Quite apparent in Shropshire County

Mohammed Abbasi of Football for Peace with Paul Armstrong, director of the Association of British Muslims.

In England Islam is growing rapidly, and the numbers of Muslims worshiping faithfully is increasing daily. Islam is expected to become the dominant religion in the United Kingdom in just 10 more years.

According to the British online journal The Mail (2 September 2016), “Mohammed,” for the second year in a row, remains at the top of the list of most popular baby boy names in England and Wales.

An Englishman by the name of George, in his mid-sixties, shared his observation with me. When I told him I was Muslim, he said, “I’m not interested in converting to Islam, but I do think Islam has more to offer the people of England than the passive, fake religiosity and unconcern that has taken hold in many Christian churches.”

He told me he identified with the concerns of Muslims who preach modesty and dedication to family life and service to others. “They are more what I think Christians ought to be,” he said.

According to the Pew Research Center, worldwide, “The number of Muslims will grow more than twice as fast as the world’s population from now until 2050.”

While the world’s population is projected to grow 35 per cent before the middle of the century, the number of Muslims is expected to increase by 73 per cent–from 1.6 billion in 2010 to 2.8 billion.

In 2010, Muslims made up 23.2 per cent of the global population. Four decades later, they are expected to make up about three-in-ten of the world’s people (29.7per cent), the Washington, DC-based think tank said.

In the short time I was here I was able to a number of Muslim leaders here in Shropshire County.

I was particularly impressed by the outreach of the faithful at Telford Central Mosque and the Shropshire Islamic Foundation.

Members of the six Shropshire mosques are offering spiritual counseling and organizing shelter to the homeless. They are reaching out to refugees who are fleeing war and offering healthcare and other assistance to needy British individuals and families.

I was honored also to meet Abdurraheem Green, founder of the Islamic Education & Research Academy (iERA), a dynamic organization based in Shropshire. Abdurraheem is a Muslim convert who is known in Muslim communities for his work on Peace TV and Huda TV and on college and university campuses. For the better part of 30 years, Green has been active in the field of dawah, inviting people to Islam.

I am grateful to Abdurraheem for having invited me to his home for dinner and introducing me to his wonderful family. (He has been blessed with 10 children!) He told me about his work with iERA. I was captivated by his genuine, meek and beautiful spirit. I found him to be a man full of God’s grace and mercy.

Also, meeting with me at the Telford Central Mosque were Mohammed Abbasi of Football for Peace and Paul Salahuddin Armstrong, director of the Association of British Muslims. I was deeply impressed by the fervent spirit of all these leaders and all the Shropshire Muslims I met. Their desire to make a positive difference in the lives of broken and needy people was clear.

What we Muslims must consider

The question we Muslims must ask is, what kind of Muslims will be produced simply by birth statistics? It is not enough to say that one is Muslim simply because he or she was born to a Muslim family.

Yes! Those who are born Muslim must be imbued with a living faith–given to self-denial and to prayer and service to others.

I have heard it said often by Muslim leaders travelling from the Middle East to the West, “In the West we have seen ‘Muslims’ without Islam, and here in the Middle East we often find Islam without Muslims.” In other words the outward manifestation of faith is not always evident in the lives of those who consider themselves Muslim simply by birth.

Since 2011 Islamic Relief for victims of war has expanded nationwide. Thousands of British Muslim men and women serve as volunteers.

It is not enough to say one is born Jewish, Christian or Muslim.

Truly, a vibrant, heart-felt, life-changing Islam is needed in England and our world today—not a religion of just traditionally “born Muslims.”  I am talking about a living faith most evidenced by the truly concerned humanitarian servants it produces.

One must believe and act accordingly to the dictates of faith! Of what value is a Jew who does not truly worship wholeheartedly the God of Abraham? Of what value is a Christian who does not follow and obey the teachings of Jesus (pbuh)? And similarly, what good is a Muslim who simply says he is Muslim by birth, but does not submit daily to God, observing and obeying the truths of the Qur’an and all God’s prophets?

Even among early Christians the issue of faith and works was fiercely debated. James, the brother of Jesus, wrote, “What good is it, my brothers, if someone says he has faith but does not have works? Can that faith save him? If a brother or sister is poorly clothed and lacking in daily food, and one of you says to them, ‘Go in peace, be warmed and filled,’ without giving them the things needed for the body, what good is that? So also faith by itself, if it does not have works, is dead” (Injil / Epistle of James 2:15-17).

And we have this promise from God in the holy Qur’an, “Those who believed and did good works, We shall blot out their transgressions and shall reward them according to the best of that which they used to do” (Qur’an / Al Ankabut 29:7).

It is absolutely true that genuine faith will be evidenced by the good works we are commanded to do. God desires obedience from each of us. Ours must be a pure faith planted miraculously in the hearts of men, women and children by the very God of Abraham (pbuh), transforming those who believe into servants of God and providing hope and direction for all mankind.

The British Religious Society of Friends (Quakers), one of the oldest Christian denominations in England, has developed strong ties with Muslims in a number of communities. Most recently, Quakers and Muslims have realized a working union on several levels–a powerful force for reconciliation and peace. These positive dimensions, they say, stem from “the love of God and of neighbor, and are at the heart of both Muslim and Christian faiths.”  Quakers are working to develop peaceful understanding both locally, nationally and internationally with their Muslim brothers and sisters.

Islam is not new to England. Its positive influence on British society began in the 19th century.

Please take a few minutes to watch the following BBC documentary about the history of Islam in England. Here you will hear the little-known story of three British leaders–William Quilliam, Baron Headley and Marmaduke Pickthall–who embraced Islam at a time when to be a Muslim was to be seen as a traitor to the Church of England and to the Crown.

Through the personal journeys of their still surviving relatives, this excellent BBC program looks at the incredible achievements (good works!) of these men and how their legacy lives on today. 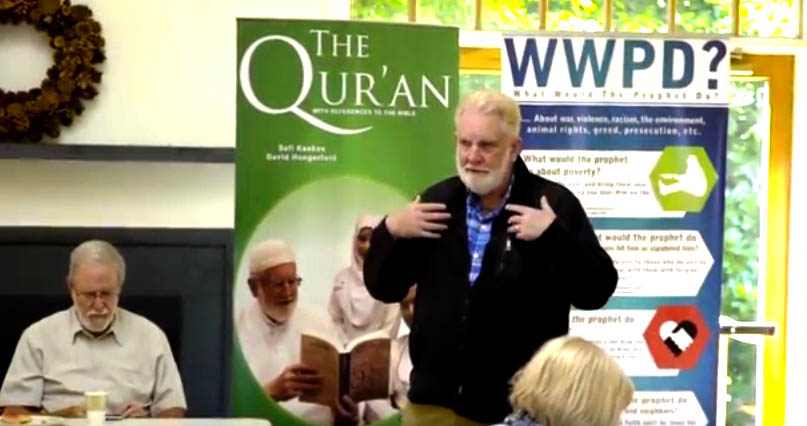