We are Muslim men and women promoting world peace, human rights, compassionate justice and religious reconciliation. We speak up for innocent men, women and children, regardless of their faith. We seek to help all who are unjustly treated due to bigotry and prejudice. We work collaboratively with inter-faith groups and other non-government organizations, seeking to be a Muslim voice of peace and reason in the midst of civil unrest and war. 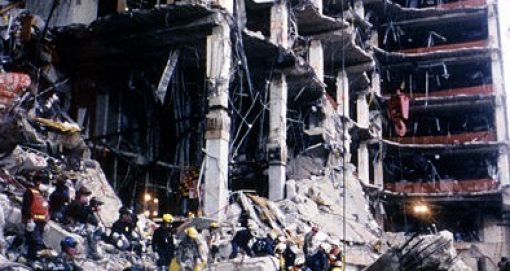 Today, Dr. Imad Enchassi took MVPR founder Samuel Shropshire and Abdulraheem Awad on a tour of the Oklahoma City National Memorial. Enchassi is the imam of the Islamic Center of Greater Oklahoma City and is a leader of inter-faith peace activities We all remember the Oklahoma City bombing! It was a domestic terrorist truck bombing of the Alfred P. Murrah Federal Building in Oklahoma City on April 19, 1995. The horrendous attack was perpetrated byTimothy McVeigh and Terry Nichols--two American anti-government extremists with white supremacist, right-wing terrorist sympathies. The bombing happened at 9:01 AM and killed 168 adults and children, injuring more than 680 others. The blast destroyed or damaged 324 other buildings within a 16-block radius and shattered glass in 258 nearby buildings, and destroyed or burned 86 cars. . May Allah use us as His instruments of peace.

Reconciliation: Peace is the only option

Our goal is to reach the largest possible world audience with relevant up-to-date information about human rights violations (Muslims and peoples of other faiths) around the globe. Also, to recruit volunteers (members) to implement grassroots campaigns in the US and other nations; lobbying US, other states and the United Nations on behalf of persecuted/repressed groups.